Study Will Focus on Cytomegalovirus, Epstein-Barr and Herpes Simplex Viruses

SAN DIEGO, Dec. 15, 2016 /PRNewswire/ -- Aethlon Medical, Inc. (Nasdaq: AEMD), announced today that it has initiated a research study to validate the ability of the Aethlon Hemopurifier® to capture viruses that are associated with increased mortality in immune-suppressed sepsis patients. The study is designed to validate the in vitro capture of Cytomegalovirus (CMV), Epstein-Barr virus (EBV) and Herpes Simplex Viruses (HSV).  Upon successful completion, Aethlon will seek to demonstrate that the Hemopurifier can simultaneously capture all three viruses. 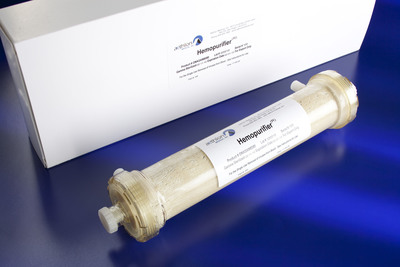 The Hemopurifier is a first-in-class medical technology currently being advanced in FDA approved studies as a broad-spectrum treatment countermeasure against infectious viral pathogens.  The data resulting from the study will further reinforce the Company's objective to fulfill the broad-spectrum medical countermeasure goal of the U.S. Department of Health and Human Services 2015 Public Health Emergency Medical Countermeasure Enterprise (PHEMCE), which is directed toward bioterror, pandemic threats and other pathogens that are not addressed with disease-specific drug therapies.

Aethlon recently completed a sepsis-related Department of Defense contract with the Defense Advanced Research Projects Agency (DARPA). Under the DARPA program, the Company achieved 29 of 29 milestone opportunities, which generated approximately $5.9 million in revenues over the life of the contract.

Sepsis, which is defined as life-threatening organ dysfunction caused by unregulated host responses to infection, is the leading cause of death in intensive care units. More than 40 sepsis-oriented clinical trials have failed, most of which have targeted the pro-inflammatory response phase of sepsis. In recent years, researchers have begun to appreciate the role of immune suppression in sepsis and the potential need for therapeutic strategies to inhibit the presence of reactivated latent viral pathogens.  In a recent large-scale study conducted by researchers at Washington University School of Medicine in Saint Louis, over 42% of critically ill sepsis patients had a reactivation of two or more viruses, which often included CMV, EBV or HSV.  In that study, viral reactivation in sepsis patients was observed to be comparable to that of organ transplant patients who are administered drugs to purposely induce the suppression of the immune system.  Additionally, patients with detectable CMV in plasma were observed to have higher 90-day mortality rates as compared to CMV-negative patients.

"In previous studies, we validated that our Hemopurifer can capture a wide range of bioterror and pandemic threat viruses that are not addressed with proven drug therapies," stated Jim Joyce, Chairman and CEO at Aethlon Medical.  "We will now evaluate the potential broad-spectrum attributes of our Hemopurifier to capture latent viruses that may contribute to increased mortality in sepsis and other immune-suppressed disease conditions."

About the Aethlon Hemopurifier®

The Aethlon Hemopurifier® is a first-in-class medical technology currently being advanced in FDA approved studies as a broad-spectrum treatment countermeasure against infectious viral pathogens.  Named a "Top 25 Invention" and one of the "Eleven Most Remarkable Advances in Healthcare," by TIME Magazine, the Hemopurifier® has previously been administered to individuals infected with Ebola virus, Hepatitis C virus and the Human Immunodeficiency virus, which leads to HIV AIDS.

Beyond human treatment experiences, pre-clinical Hemopurifier studies have validated the capture of Chikungunya, Dengue, Middle East Respiratory Syndrome Coronavirus, West Nile and Zika virus, as well as Vaccinia and Monkey pox, which serve as models for human Smallpox infection.  Specific to pandemic influenza threats, Aethlon has validated the capture of H5N1 avian flu, H1N1 swine flu, and the reconstructed 1918 influenza virus, which represents a model for the strain of influenza that killed an estimated 50 million victims in 1918 and 1919. To validate treatment performance, the Hemopurifier is supported by the HP Virus Capture Assay™, which quantifies the number of viruses captured within the Hemopurifier and no longer circulating in the patient.

For most individuals, latent or dormant viral pathogen infection is not considered life threatening, as the body's immune system keeps these pathogens in check.  However, individuals with a compromised immune system are at significant risk of serious infection from these otherwise innocuous viruses. Among the most common latent viral infections are Herpes Simplex Virus (HSV), Epstein-Barr virus (EBV) and Cytomegalovirus (CMV).  More than 90% of adults have at least one of these latent viral pathogens.

The incidence of cytomegalovirus in the U.S. population is greater than 60%, with prevalence increasing up to 90% for elderly individuals.  Much like HSV and EBV, CMV is a dangerous pathogen for individuals with compromised immune systems.  Beyond sepsis, individuals with high-risk CMV infections include solid organ transplant recipients, hematopoietic cell transplant recipients, those with HIV infection, cancer patients, and recipients of immune-modulating drugs.

Epstein-Barr virus is extremely prevalent in the U.S., affecting 80%-90% of the country's population.  Beyond the potential role of EBV in sepsis, immune compromised individuals face an increased risk of stem cell and solid organ transplant rejections. EBV infected individuals are also at risk for Burkitt's lymphoma and nasopharyngeal carcinoma.  HIV-infected individuals who are co-infected with EBV are at risk for a wide range of severe disease ailments.

Estimates for the incidence of herpes simplex 1 and 2 in the U.S. are approximately 65% and 17%, respectively.  Common physical symptoms include minor cold sores and lesions. However, HSV can cause severe ailments in immunocompromised patients.  Beyond the potential role of HSV in sepsis, herpetic infections can cause progressive and persistent esophagitis, colitis, perianal ulcers, and pneumonia. HSV can also cause central nervous system infections such as encephalitis and meningitis.  Neonatal HSV infection can contribute to infant morbidity and mortality.

Aethlon Medical (Nasdaq: AEMD) is a leading developer of immunotherapeutic technologies to combat infectious disease and cancer.  To augment the body's natural immune defenses, the Aethlon Hemopurifier® eliminates life-threatening disease targets that are often shielded from the immune system and not well addressed by traditional drug therapies. The technology captures circulating viruses, bacterial toxins and cancer promoting exosomes through affinity attachment to a unique structure that cloaks these targets from immune detection. At present, the Hemopurifier® is being advanced under an FDA approved clinical study. Aethlon is also the majority owner of Exosome Sciences, Inc., a company focused on the discovery of exosomal biomarkers to diagnose and monitor life-threatening diseases.  Aethlon is part of the Russell Microcap® Index.  Additional information can be found online at www.AethlonMedical.com or you can connect with us on Twitter, LinkedIn, Facebook and Google+.

To view the original version on PR Newswire, visit:http://www.prnewswire.com/news-releases/aethlon-announces-initiation-of-sepsis-related-virus-study-300378976.html